Top-10 most productive countries: are they the wealthiest, the most efficient and the happiest?

We are wondering whether soon-to-be-updated statistics from the Organisation for Economic Co-operation and Development (OECD) would spring any surprises this year. In the meanwhile, we decided to revisit previous rankings of the world’s most productive countries and explore global productivity landscape. Which nations are the most productive, are they the richest, the most efficient and the happiest? 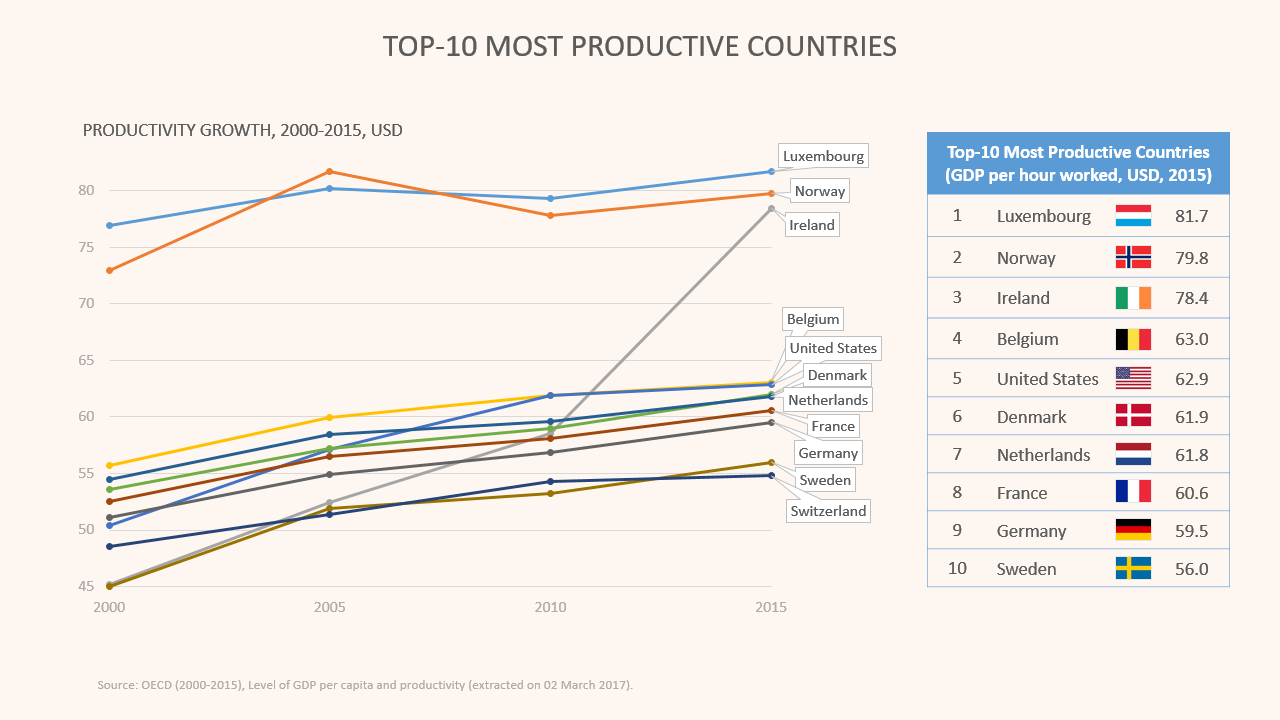 Race for productivity started at the time of the Industrial Revolution and only accelerated since. Labour productivity is what drives economic growth. Measured as GDP (output) divided by hours worked per person (input), productivity is often used as an indicator of a country’s economic health.

The line-up of the most productive countries has barely changed in the last 15 years:

However, it is a tight competition for a place in Top 10 requires not only to outperform other countries, but also to surpass own records.

Productivity is about constant improvement – standing still means falling behind.

Worth mentioning that average growth rates among the Top-10 are gradually slowing down though. Emerging economies on the other hand, Eastern Europe or Latin America for example, show faster growth due to higher potential for productivity improvement. However, any drastic changes in the global productivity landscape in the next few years are rather unlikely.

The most productive nations are also the wealthiest

The more efficiently you work – the more you produce. So it is no surprise that the most productive economies are also the richest: The most productive countries have the shortest work weeks

To calculate how much time a week an average employee spends at work, we divided hours worked per person annually (by OECD statistics) by 52 weeks a year. Although there is some correlation between productivity and hours worked, there are also significant differences in the length of workweek. On a side note, the latest initiatives in France and experiments in Sweden to cut down working hours may change the positioning of players in the next few years.

Indeed, working longer hours isn’t the best strategy to achieve higher productivity. However, shorter hours do not guarantee high productivity either. There is another factor here – efficiency. Only efficient use of time and resources allows you to get more done in less time.

Productivity is about efficiency and working smarter, not longer.

Scandinavia and Netherlands – both productive and happy

It feels lately that the term “productivity” is getting negative associations with stress, burnout, and constant pressure to deliver more-better-faster. So we decided to match productivity indicators from OECD statistics against happiness levels in these countries from the UN’s World Happiness Report. Happiness score takes into account GDP per capita, social support, healthy life expectancy, freedom to make life choices, generosity, and perceptions of corruption. Being productive does not make you happy or unhappy. In fact, productivity, efficiency and wealth do not always go alongside either.

But some countries manage to combine it all!

Netherlands, Denmark, Norway and Sweden are the only countries that rank in all of our Top-10 lists: productive, wealthy, efficient and happy. How do they do it? What does productivity mean to you? Please share your thoughts in the comments below.